The advertisement on the back cover of this month’s issue of the Columbia Journalism Review struck me as astonishing. Here it is: 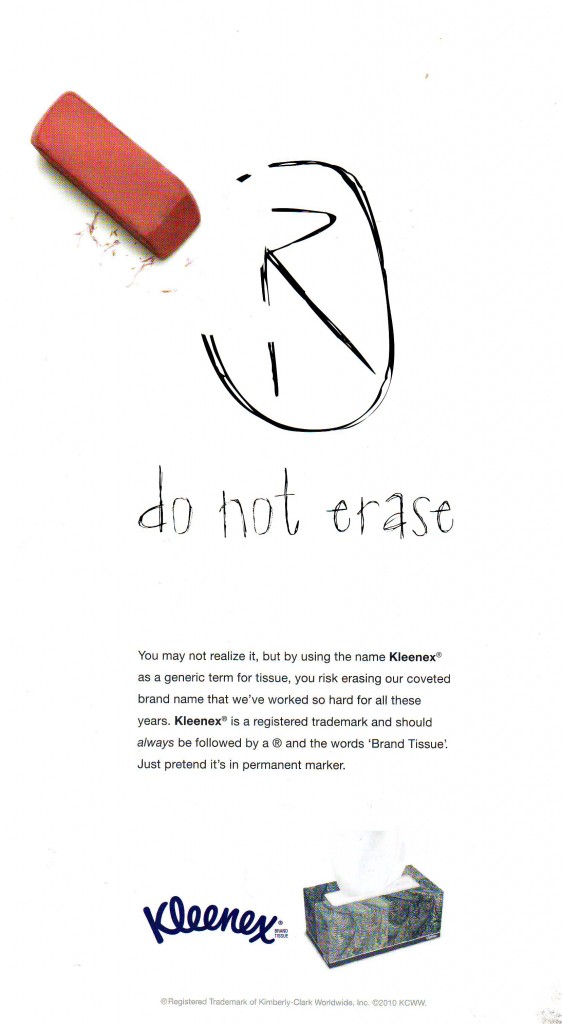 Remember, CJR is a magazine targeted at journalists and journalism educators. So let me get this straight. Kimberly-Clark has spent a substantial sum of money to place an ad exhorting journalists to help protect their brand by ensuring Kleenex is only referred to as "Kleenex ® Brand Tissue?" Does this strike anyone else as insane? Or is this to be seen as a shot across the bow — hacks, here’s your fair warning, and if you don’t refer to Kleenex (excuse me, Kleenex ® Brand Tissue) by its proper moniker, you risk being sued?

I’d be interested in knowing if this ad made others uneasy.

Toronto’s municipal election will be held on October 25th this year. With sixteen days left in the campaign, I’m astonished that Rob Ford is the mayoral candidate leading the pack. For those of you not living in Toronto, Ford’s controversial record as a councillor stands on its own.

Ford, and many other candidates that run on a platform of cost reduction, rely on the fact that voters often can’t visualize the difference between $1M and $1B. Without a sense that these two figures are three orders of magnitude apart, it’s easy to think that halving the number of Councillors (which will save $2.25M per year) will have a significant impact on Toronto’s debt load (somewhere in the $3B range).

A while ago, while looking into the "quantitative easing" that the US Federal Reserve is engaged in, I came across the following excellent visualization of the difference between $1M, $1B and $1T dollars. Have a look.

Much ink, digital or otherwise, has already been spilled about The Globe and Mail’s recent redesign. The end product mirrors a great deal of what the San Francisco Chronicle did last year with its redesign; a long-term contract with Transcontinental, a set of new digital printing presses that would permit glossier stock, a smaller form factor, and colour on every page. The end product is definitely beautiful. But that’s like complimenting your neighbour on his fine new team of horses when the Ford Model T is already revolutionizing transportation.
END_OF_DOCUMENT_TOKEN_TO_BE_REPLACED

I’m pleased to present the first episode of my podcast, The Ephemera Report, featuring an interview with Allan Symons of the Canadian Clock Museum in Deep River, Ontario, the town where I grew up. Check it out!

Regular visitors to this site will notice that I’ve substantially changed the look and feel here. As my wife says, anything with a dark burgundy background looks dated and I definitely felt that way about the old theme I was using.

The changes are more than just cosmetic. I’m going charting a different course: one that veers away from purely IT topics. There will, of course, still be some in-depth articles on technology. But I’m shifting the focus to using the other side of my brain — the creative side. END_OF_DOCUMENT_TOKEN_TO_BE_REPLACED

Before Clay Shirky was courting controversy by claiming that women don’t get ahead because they aren’t arrogant, self-aggrandizing jerks, he wrote a book called Here Comes Everybody: The Power of Organizing Without Organizations

. In this book, he performs an eloquent and well-thought-out analysis of social organization in the 21st century, leading to the unsurprising conclusion that the dramatically lower costs for self-organizing are bound to have a serious, disruptive effect on our society and the power structures that govern it. END_OF_DOCUMENT_TOKEN_TO_BE_REPLACED

I recently attended a panel on the future of journalism with Clay Shirky and Andrew Keen, which spurred me to read and review Keen’s book entitled “The Cult of the Amateur: How Today’s Internet is Killing Our Culture”.
END_OF_DOCUMENT_TOKEN_TO_BE_REPLACED

(with apologies to Pete Seeger for the headline)

It used to be that back in the day, Canadian websites under the .ca umbrella had to be further categorized by a provincial subdomain. For example, the City of Toronto’s website used to be at city.toronto.on.ca, the Toronto Public Library at tpl.toronto.on.ca, and so on.

If I recall correctly, these registration rules (associating the geographic scope of the organization with the domain hierarchy they were allowed to register in) were abandoned in about 1995, at least in Canada. I remember this because my Internet Service Provider at the time was Intranet Technologies of Ottawa, which went from being intranet.on.ca to intranet.ca. (Only later did I reflect on the stupidity of naming an Internet service provider “Intranet”.)

It’s a curious footnote to history, I guess, that most of these province-and-city level sub-domains have fallen by the wayside and most organizations do not use them any more for their canonical website address. However, they reflect a time when the Internet was more rigid and organized according to some sort of taxonomy, and for that, I’m somewhat wistful.

In the previous entry, I made the statement that many of us working in new media don’t have a clue about what’s going to be successful and what’s not. I wanted to expand on this topic with a few key points. At first glance, you could interpret these as being pet peeves. My intention, however, is to set some basic ground rules for success even in a space where tools, technologies and strategies change at the drop of a hat. END_OF_DOCUMENT_TOKEN_TO_BE_REPLACED

It seems like over the last two months, everyone I know has been talking about Facebook. (I guess that’s not surprising in my particular locality; according to Wikipedia, Toronto has the largest concentration of Facebook users, numbering 50,000). Personally, I’ve stayed away from Facebook, not only because I perceive it to be the Web 2.0 (or are we on 3.0 by now?) version of MySpace, but because people’s expressions of excitement at having found long-lost acquaintances are exactly what turn me off. I’m not interested in reconnecting with people that I’ve lost touch with for years; there’s probably a legitimate reason for the loss of contact, and I’m happy letting sleeping dogs lie.

It occurred to me recently that there are far more valuable reasons for avoiding Facebook, however; a database that contains a ream of personal information about your interests, hobbies, friends, political affiliations, and so on is a ripe target for marketers interested in data mining the hell out of it. What weaselly marketing guy wouldn’t salivate at the thought of being able to correlate any arbitrary aspect of a user’s profile with another, and deliver targeted content or advertisements to that user? Or to resell that data to large corporations to be able to tailor advertising campaigns towards the psychology of a given market segment to induce members to buy a product? The possibilities are endless – and disturbing. END_OF_DOCUMENT_TOKEN_TO_BE_REPLACED