Initial reviews of the actual device were certainly positive. Ginny Miles of PCWorld wrote a glowing review, saying that it’s the first device that truly shows off the beauty of the Windows Phone 7 operating system. And Matthew Panzarino of TheNextWeb wrote:

If the Lumia 900 was judged completely on its own merit, it would stand as one of the most beautiful and well designed phones in the world, as it deserves to. 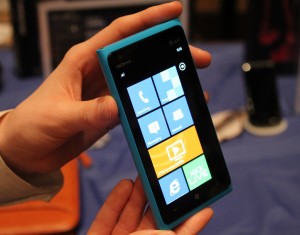 But it won’t have the luxury of standing on its own. The smartphone marketplace is dominated by Android and iPhone, and Microsoft/Nokia have yet to develop a killer way to surmount their underdog position. Microsoft, surprisingly, hasn’t closely tied the phone to its desktop Windows operating system, which is probably one of the only levers it can pull to convince consumers to buy the device, similar to how it achieved market dominance in web browsers by bundling Internet Explorer with Windows. TNW’s Panzarino goes on to note that:

350 million units of Windows needs to be leveraged to give people a reason to buy a Windows Phone. Find a way to do that and the battle is largely won.

Most fatal to the whole enterprise, however, is Microsoft’s inability to overcome its serious image problem with both the “Windows Phone” and “Zune” brand names. (The Windows-based Zune software is the equivalent to iTunes, needed to sync files to a Windows Phone.) Earlier versions of the Windows Phone OS were slow and suffered from poor design, like a “Start” button ported from the desktop equivalent. And Zune is the name of Microsoft’s failed portable music player, which was hampered by their proprietary DRM framework.

One can argue that Microsoft merely has a branding problem. The company continues to use brand names even when consumers have poor associations with them. And they also confuse end users by mutating brand names from one product into another, as with Zune. But more than just a branding problem is the fact that the company makes so many missteps. In a fast-moving technology marketplace where first impressions matter more than ever, Microsoft has made too many poor first impressions.

Both Nokia and Microsoft have put incredible effort into developing a product that technically might be better than the iPhone or any Android device out there. But if the sales figures from the Lumia’s European predecessor are any indication, the product will wither because of consumers’ allergic reactions to the Microsoft name.