I’ve finished reading Jeff Jarvis‘s “Public Parts“, a book that advocates and celebrates publicness as a force for good. While I agree with some aspects of Jarvis’s argument, I find that too often, living one’s life in public is just a more polite name for narcissism. And on occasion, Jarvis himself crosses into that territory. 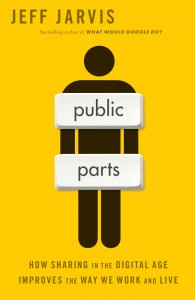 But the underlying principle driving institutional disclosure — the betterment of society — is not the same principle driving personal disclosure. Individuals are motivated to disclose their own information primarily because it satisfies a base human need for attention. Twitter, Facebook, Tumblr, and other social media services are biased towards self-promotion and ego-stroking. Underlying all the lofty talk about “connecting people” and “creating communities” is the fact that most people’s tweets or Facebook updates are simply subtle or overt statements about how cool they are. That’s not to say that users of these services can’t overcome that inherent bias and have meaningful conversations. But I think it happens a lot more rarely than social media advocates would have you think.

That’s what ultimately disappointed me about Jarvis’s book. As someone who already has had a substantial online presence (I’ve had a website since 1995), I’ve clearly bought into the notion that a public presence is helpful. People can find me easily, and my ideas have a platform that I control. But I find the type of public life advocated by Jarvis — to build one’s personal brand for the primary purpose of marketing oneself for professional and personal gain — treads too far on the side of raw narcissism. He holds Seth Godin up as an example of someone who has a strong brand and therefore someone to be emulated. Godin gives Jarvis unsolicited advice on how the book itself can be leveraged for professional gain:

Godin is to blame for my writing books. He sat me down one day and said I was a fool if I didn’t write one — and I would further be a fool if I thought the book was the goal. No, he said, the book would buiuld my public reputation, which would lead to other business.

The notion that the book is not primarily a conduit for ideas but simply a means to an end, personal gain, is what’s awful. The end state would be a world of pure branding and personal marketing. This is the kind of publicness that I can neither agree with nor wish to emulate.

Sadly, I don’t see the tide turning anytime soon. As much as I may disagree with it, Jarvis’s description of the new publicness is reality. To the detriment of real conversations about real ideas, those who spend the majority of their time actually working are overshadowed by those who spend 10% of the time working and 90% of the time talking about their work. We have met the enemy and he is us.