Being both a transit nerd and an iPhone user, I’ve tried out a bunch of iPhone apps to help me make the best of my New York City transit experience. There are 51 iPhone apps listed on the MTA’s website, but there’s little indication which ones are good and which are bad.

Keep in mind that I’m strictly a subway user, so I haven’t had occasion to test any of the bus-related apps.

END_OF_DOCUMENT_TOKEN_TO_BE_REPLACED

Wireless device support — and indeed, wireless reliability — has been frankly awful in Linux up to this point. Even among the devices that work (at least some of the time), there are frequent problems. For example, my IBM Thinkpad T42 laptop comes with an IPW2200BG adapter that mostly works — except after suspend, when it will refuse to function unless the driver is unloaded and reloaded. I’m using NetworkManager to "magically" manage my network connection; when it works, it works fabulously, but there are no docs. None. I challenge you to try and find a man page or any scrap of documentation about NetworkManager anywhere on the Internet.

At least on the driver side there might be some hope on the horizon. Devicescape, a WiFi software stack specialist, has just released their "Advanced Datapath" IEEE 802.11 driver stack under an open source license, and several kernel developers are trying to get it integrated into the Linux kernel. Of course, as with all integrations, this won’t happen overnight, but when it does, many wireless features such as WPA, WEP, software MAC, and so on that currently require add-ons like the userland wpa_supplicant for WPA could be directly run by this stack.

I’m looking forward to the day when I don’t have to do this magic incantation to get wireless working after suspend:

A complete non-sequitur: survey questions that make no sense. 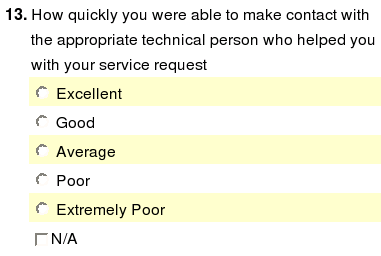 I finally got my FreeBSD laptop to authenticate to the company’s WAP 54G wireless access point. It turns out that the problem was with the Linksys firmware! I spent two days futzing with FreeBSD and trying to figure out why the iwi card wouldn’t associate with the access point, and finally in frustration I flashed the WAP54G’s firmware to version 3.04 (from version 2.08), even though the release notes said nothing about fixing WPA association. And it worked!

I guess this is what happens when you buy consumer-grade devices.

I finally gave up on SUSE Linux 10 on my ThinkPad T42 from work.

There were a number of reasons for doing so, but in general I just found that everything was far too complicated and had too many GUI layers and layers of abstraction upon layers of abstraction, such that I couldn’t actually do anything on the box without fear of breaking it.

END_OF_DOCUMENT_TOKEN_TO_BE_REPLACED

Here’s an interesting tidbit: apparently the use of cellular telephones on board airplanes does not interfere with navigation systems. It does, however, wreak havoc upon base stations when you’re flying past them at 500mph.

I didn’t know this until NewsScan Daily posted it. Here’s the excerpt:

MOBILE PHONES CLEARED FOR TAKEOFF?
Contrary to popular airline lore, mobile phones don’t really interfere with airline navigation systems. The real reason phones are banned during flight is that they disrupt mobile networks on the ground as they zoom from one base-station to the next at 500 miles an hour. But that problem is about to be solved, thanks to new technology that will prevent cell phone signals from leaving the airplane cabin. Instead, a laptop-sized base station, called a “picocell,” will emit a network signal that will enable onboard cell phones to “roam” — eliminating any interference with avionics and terrestrial networks. The new technology is the creation of WirelessCabin, a consortium led by the German Aerospace Center and including members such as Airbus, Siemens and Ericsson. It is designed for cell phones using the European-dominant GSM standard and also supports the popular Wi-Fi protocol. A similar system targeting business jets will be flight-tested this year, and European and U.S. regulatory bodies are developing rules to address the use of wireless devices in flight. Airlines likely will team with wireless carriers or satellite operators to administer the in-flight mobile calling systems, and may try tying the service to their frequent flyer programs, offering members lower rates or flyer miles when they make calls. (The Economist 1 Apr 2004) http://www.economist.com

I have to wonder why we’ve been lied to all these years. Perhaps it’s because it would be too difficult to explain to Random Clueless Guy what the actual problem is.