There seems to be one common element to the Arab Spring: all the autocrats seem to take to the airwaves to lecture their people. Have a look: 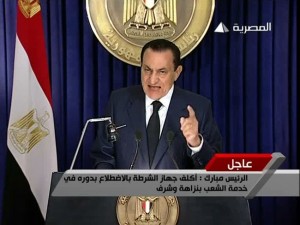 I’m sure this condescending and patrician attitude reflects their view towards their own people: that they’re too infantile or fragile to understand geopolitical issues. You can imagine Muammar al-Qaddafi thinking, as he wags his finger on state television, wouldn’t it be better for everyone involved if they just went back to their homes and schools and left the “governing” to the people who really understand power?

April Fool’s Day is upon us again, and along with this are some truly stupid April Fool’s jokes. Chief among them was YouTube’s replacement of its featured videos with ones that actually link to Rick Astley’s Never Gonna Give You Up, a common Internet meme known as "rickrolling". Now characterize me as an old codger, but I have to say that rickrolling is one of the stupidest Internet memes I have ever come across. I really don’t see what’s so funny about this. Maybe I’m missing something? It’s been done many times over, even in xkcd cartoons, but really folks, it’s not funny, and it should just be put to rest.

I’ll tell you what I found really funny: the folks over at Atlassian who announced the JIRA Solver. Some of you may recall that Cenqua (now a wholly owned subsidiary of Atlassian) presented both the PairOn extreme-programming chair and the Commentator automated code-commenter (commentator?) on 1 April 2005, both of which were a riot. Now that’s creative… perpetuating a lame Internet meme is not.

I’m cleaning out my $HOME/doc directory and I found this gem from ten years ago, when I was still a student searching for a new ISP. How things have changed – “what 56k modem standard are you favouring?”

I am currently in the process of searching for a new Internet service provider in the Toronto area. I thought it might be best if I simply listed my access and web page requirements, along with technical questions I wish to have answered, and you will follow up with a price range. I can be reached by e-mail at [email protected][deleted]

If you could answer my questions and give me a price quote on the above requested services, with a breakdown if certain things are extra (e.g. unlimited transfer rate), I would really appreciate it.

I got bitten by this bug after upgrading to SpamAssassin 3.2.4 recently. It seems that the GnuPG key shipped with SA precludes the verification of signatures from updates downloaded using sa-update, due to some esoteric defect with the OpenPGP design. Anyway, the point is that attempting to download new signatures using sa-update results in the following error:

(How many times can one say the word “failed” before I get the message?)

Anyway, it looks like the SA folks have corrected the problem with their key but it’s only available in SVN trunk so you have to perform the following magic incantation:

The bug is still open and will be fixed in the next version (boy, if I had a nickel for every time I’ve heard that from vendors…)

Forget WordPress, Facebook, Google, and all that Web 2.0 crap… remember Gopher? Actually, I never got a chance to really use it, which is why I set up my first Gopher home, perhaps 15 years too late. For those of you so inclined, and still armed with a Gopher client, go to Gopher site sdf.lonestar.org, path /users/keymaker. Those of you with newfangled "World Wide Web Browsers" like NCSA Mosaic, you’ll have to use this ugly URL.

Meredith & I went to Nuit Blanche in Toronto over the weekend and came across Science & Sons‘ installation on the grounds of the Centre for Addiction and Mental Health on Queen Street West. They welded together a series of trumpet horns with mouthpieces into which you could plug iPod earphones. I knew this looked familiar, so I visited their website – to discover that they are the ones responsible for the Phonofones exhibited this year at the Toronto Outdoor Art Exhibition (TOAE)!

For those who weren’t able to attend TOAE this year, Science and Sons have crafted iPod “phonographs” out of ceramic, into which one can plug earbud headphones. Thus, by using solely passive amplification, the output of one’s iPod can be boosted to up to 55 dB. Phonograph horn technology is, thusly, born again.

Right now the Phonofones, starting at CAD $450, are slightly beyond our budget, although they would definitely make a fascinating and practical conversation piece (no pun intended). I’m hoping that Science & Sons can reach some sort of licensing deal with a manufacturer to produce them on a larger scale.

I diligently enter all my purchases (at least those that have receipts) into GnuCash. I’ve been keeping track of my purchases since 1994, which means that I can, at a glance, see that I have paid, for example, at least $6,367.08 in GST since then. (Ouch.)

In doing this, I’ve begun to notice how certain stores’ receipts are a complete waste of paper. For instance, I’m looking at a receipt for a birthday card I bought for Dave Raso, and it is ten inches long. That’s right, for one $3.29 birthday card, I got ten inches of cash register receipt.

Just saw another tzdata update get pushed down the Fedora Core YUM channel; this one changes a couple of zone files, one of which is to implement standard time year round for Mongolia. That’s right, the Mongolians have abandoned Daylight Savings Time! I think they’re onto something here…

Last night I had the rare opportunity to be given a tour of the Toronto Transit Commission‘s Control Centre. The tour was organized by the East Toronto Chapter of the Professional Engineers of Ontario, of which I am a member.

END_OF_DOCUMENT_TOKEN_TO_BE_REPLACED

Those of you who know me know that I am a huge fan of the online comic Toothpaste for Dinner. Drew’s brand of humour matches mine very closely, only he has far funnier jokes. Often they hit pretty close to home, if you’ve worked in IT for any length of time. For example, I often read Infoworld‘s "Off The Record" for horror stories — there was one in February about a boss telling an employee to "take it to the next level" (which usually means some kind of a death march). Now check out this cartoon — spot on!

Unfortunately TPFD’s RSS feed has been broken for some time, and even though I emailed Drew about it, I don’t really expect him to fix it. After all, his FAQ says the following:

I already did, you just didn’t even bother to look around to find them. WHY DIDN’T YOU SPEND ONE MINUTE CLICKING ON MY WEBSITE BEFORE WRITING ME?! If you know what RSS is (don’t worry if you don’t, it is actually pretty useless, but nerds get mad if you don’t have an RSS thing on your site) then you know how to find if a site has an RSS feed.

Not that I care — I’d rather that he make funny cartoons rather than worry about broken RSS feeds. Edit: I had taken it upon myself to create an on-demand fix of the RSS feed, but Drew expressed consternation in private correspondence that I appeared to be creating a public RSS feed of his content, and while I don’t agree with him for a number of reasons, I’m abiding by his wishes and removing the public link to my RSS re-feed.

Those of you who are programmers can simply write your own script to s/&date/&amp;date/g; his RSS feed on the fly.